Where to go and what to see

This page contains a few ideas for excurtions to villages, towns and other sights in the area. It is by no means complete – there are numerous villages and places worth a visit, and we simply cannot list them all. We encourage you to feed your curiosity and explore the area on your own! 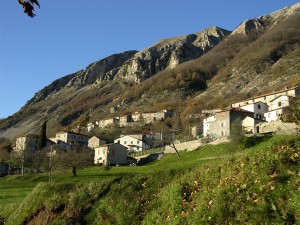 We start in our own village. San Cassiano is “widespread”, consisting of several distinct hamlets: Cocolaio, della Chiesa, Livizzano, Cembroni, Capella and even more.

The church is an interesting building, with a lot of marble reliefs on the outside, some of which seems rather misplaced, probably a result of the numerous refurbishings the church has lived through. It is dating back to the 10th century, and are said to be built upon the remains of an ancient Diana temple.

If you are (more than) lucky, at some time you might find the doors to the small chapel opposite the church open. It houses the village’s most precious treasure – the wooden statue of “il Cavaliere di San Cassiano” made by Jacopo della Quercia (1374-1438). 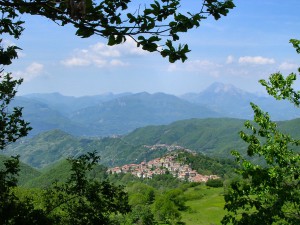 Driving upwards from Loc. Cocolaio, passing the church, and further a couple of kilometers, the road takes of to the right to Montefegatesi. The road leads over a mountain pass, approx. 1000 meters above sea level, passing close to Monte Prato Fiorito, one of the few mountains in the area that are not covered with forest.

The village of Montefegatesi lies at about 800 meters above sea level. This is a beautiful, ancient village, where the legendary poet Dante Alighieri is said to have resided during his banishment from Firenze.

The village is clinging to a cliff, and it is quite a difference in altitude between two of the main sights of the village: The monument and panoramic terrace on the top, and the display of archaeological artifacts in an open square right under the church. 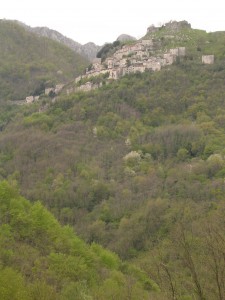 Approx. 13 km east from Bagni di Lucca along the SS12, just after the province border to Pistoia, the narrow and winding road towards Lúcchio takes off to the right. A few kilometers, and you will arrive at this spectacular village that is clinging to one of the most rugged and rough mountain sides in the area.

There is a magnificent view from the fortress ruins at the top.

The nearest town, and center of our municipality. The town stretches along the river Lima for several kilometers, mainly along the north bank. It consists of three main settlements: La Villa, Ponte a Serraglio and Fornoli.

Originating as a Roman thermal bathing resort based on its thermal springs, the town has been based around what is nowadays called a spa for centuries. It had its days of glory during the 19th century, as a most fashionable spa and “home to princes and poets”. The first casino in Europe was founded here – it was later moved to Monte Carlo when gambling was banned in Tuscany.

One of the old spa establishments is still open, while others have been restored as museums. The active “Terme Jean Varraud”, offering a range of treatments for health as well as well-being, is located on top of a hill, reached by road from Ponte a Serraglio (in the middle of Bagni di Lucca).

6 km west og Bagni, you find Borgo a Mozzano. The greatest sight in Borgo is passed on the way from Bagni – it is the spectacular bridge called “Ponte della Maddelena”, or also “Ponte del Diavolo”, the devil’s bridge, a 900 year old stone bridge crossing the river Serchio.

In Fornoli, take the road north towards Garfagnana, and follow signs to Barga. This is an old fortified town, still with the town wall intact. On the top you will find the old cathedral, constructed in several stages between the years 800 and 1600. The oldest part has windows made of alabaster, providing a very special light inside. On the outside, there is a spectacular view of the monumental mountain range in Garfagnana.

In the slopes down towards the town wall lies the old part of the town.